Rising fuel prices, a cost of living crisis and rail strikes are prompting people onto their bikes. On 21 June 2022, London saw record numbers along parts of its cycle network; one stretch alone saw 20,201 journeys completed in a single day.

Cycling is a great way to save money, have fun and keep fit. In the aftermath of the initial covid-19 restrictions, our YouGov survey revealed that the number of people intending on commuting by bike doubled. In January 2022 the government launched the revised Highway Code to enhance safety for cyclists and other vulnerable road users. We are also seeing investment across the country to better enable safe cycling, which includes establishing segregated cycle routes, low traffic neighbourhoods and reducing speed limits.

In spite of this, cyclists are still exposed to danger. Our cycle networks are rarely connected, meaning that segregated or protected routes will not always deliver a rider safely to their destination, forcing them amongst traffic during various stages of their journey. While much has been done to support cyclists in our towns and cities, rural riding remains disproportionately dangerous. Of the 141 cyclists who died on our roads in 2020, 89 of those were on rural roads.

With more people turning to their bikes, perhaps dusting them off after years in a shed, it is worthwhile reminding everyone of their responsibilities which are now enshrined in the revised Highway Code.

Previously The Highway Code had guided for all road users to be considerate towards each other, applying this principle to pedestrians and drivers equally. This therefore placed children walking to school on an effectively equal footing with lorry drivers when considering their responsibility for road safety. The new hierarchy of road users places those who can do the greatest harm with the greatest responsibility to reduce danger to others. This is designed to protect the most vulnerable people on our roads.

The new rules place emphasis on this hierarchy applying most strongly to drivers of heavy goods vehicles and passenger vehicles, vans, minibuses, cars and motorcycles.  Likewise, cyclists have a greater responsibility to reduce dangers posed to pedestrians.

In our work representing those who have suffered life changing injuries, we see too many collisions resulting from vehicles turning across the paths of cyclists at junctions; drivers may fail to check for the presence of cyclists before committing to their manoeuvre, even when cyclists have been alongside them when doing so.

The Highway Code has been revised to guard against this, but collisions still occur. For example, the rules stipulate that when turning into or out of a junction, drivers should not cut across the path of any other road users. This includes where there is a cycle lane. Drivers are expected to stop and wait for a safe gap before beginning their manoeuvre. Drivers are directed to not turn at junctions if it would cause a cyclist going straight ahead to stop or swerve, just as they would do with a motor vehicle.   Whilst the rules may set this out, you should be aware that not all drivers will know them and to take care accordingly. In these situations you may want to try and make eye contact with drivers, so that you know they have seen you.

Junctions also pose risks when cycling in the presence of large vehicles, in particular articulated lorries that may be turning. You should therefore only pass to the left of large vehicles when they’re stationary or moving slowly and to do so carefully, in case the driver has not seen you. It is worth noting that large vehicles may move to the right before turning left and that their rear wheels may come close to the kerb whilst turning.  This poses a significant risk to cyclists who are positioned to the inside of a lorry in this scenario.

Whilst a cycle path may be available, cyclists are not obliged to use them. Such routes can make your journey safer and easier, but you can use your judgement and are not obliged to use them. For example, whilst many new routes have been established that are well maintained, some may have fallen into disrepair; potholes, sticks and debris may litter the path. You should be aware that some cycle paths may also be shared with pedestrians and horses; it is therefore important to take care and be considerate in these circumstances.

When riding in pairs or in groups, cyclists are allowed to ride two abreast. If there is a group of riders together, this can often ensure greater safety for all road users. If a driver is going to overtake a group of riders who are two abreast, the driver will be in the other carriageway for a shorter time than if overtaking a long line of riders in single file; this therefore reduces the time spent in the opposite carriageway, making the overtake safer for all. The Highway Code does, however, note that cyclists should never ride more than two abreast and to ride in single file on narrow or busy roads, as well as round bends. It also notes that cyclists should also be aware of drivers and to allow them to overtake when it is felt safe to do so.

The Highway Code clarifies that when at junctions or in slower moving traffic, a cyclist should proceed as if they are a motor vehicle, positioning themselves in the centre of their lane, to ensure that they remain visible and to avoid drivers from attempting to overtake when it would be dangerous to do so. Accordingly, drivers are also expected to remain behind cyclists at junctions, even if they are waiting to turn and are positioned close to the curb. Drivers of large vehicles should also ensure that they have sufficient visibility ahead of their vehicles, to ensure that they can see where cyclists may be waiting, allowing for any blind spots in front of their vehicles.

At roundabouts, cyclists should be given priority, noting that they will be traveling more slowly than motor vehicles. Drivers should not overtake them within their lane and should allow them to move across their path as they travel around the roundabout. It is also reiterated from the prior Highway Code that even if a cyclist intends on continuing around a roundabout, they may remain in the left-hand lane, but should signal accordingly.

Close passing represents a serious danger to cyclists. We’ve seen cases of people on bicycles being clipped by fast moving traffic, resulting in catastrophic injuries; we’ve also seen those cycling in our city centres be dragged under the wheels of vehicles that have attempted to pass them, but done so too closely.  Some cyclists have taken to having cameras mounted to their helmets or bikes to capture ‘close pass’ moments and reporting these incidents to the police, due to the marked danger that they pose.

Cars should leave at least 1.5 metres of space when overtaking cyclists at speeds of up to 30mph. More space is expected when overtaking at speeds in excess of 30mph and extra care should be taken in poor weather. We have seen this rule questioned, with drivers querying what to do if the road is too narrow to leave the required 1.5 metres of space. In short, if there is not enough space then it is not safe to overtake. Drivers should wait until it is safe to overtake and not put a cyclists safety at risk.

If cycling past stationary or parked vehicles, take care to leave space in case a driver or passenger opens their door into your path. Through our work, we all too often see the injuries suffered by doors being opened into cyclists’ paths. You should leave a car door’s width, or 1 metre, when passing parked vehicles, as well as to watch out for pedestrians stepping out from between vehicles.

To mitigate this risk, guidance has been given to drivers too, in the form of the “Dutch Reach”. When able to do so, drivers and passengers should open their vehicle door using the hand on the opposite side to the door they are opening. For example, if they are in the right hand seat, they would use their left hand to open the door. In doing so, this forces them to turn their body and head, better enabling them to check over their shoulder and their blind spot. This better enables those in vehicles to check whether it is safe to open their door, reducing the chance of opening their door into someone’s path. 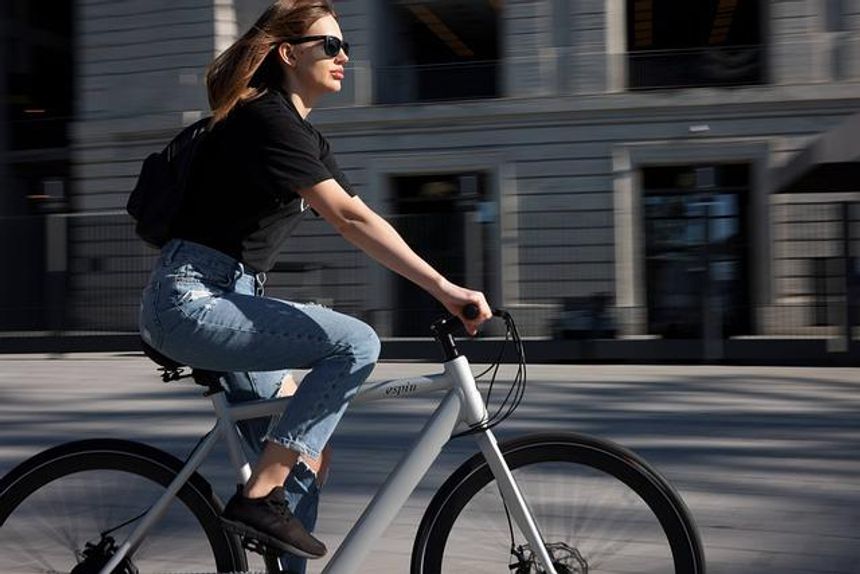